This is my third interview with Jeffrey Mishlove, for his YouTube channel “Thinking Allowed.” The interview is about 46 minutes long. Jeffrey interviewed me, this time, about my books on Rumi, especially my most recent book that I wrote with the help of Farzad Khalvati and Mitra Shafaei: The Hidden Teachings of Rumi. Jeffrey said this about the interview on his YouTube page:

Doug Marman shares some insights into the life and poetry of the great Sufi master, focusing especially on the unique relationship between Rumi and his spiritual lover and mentor, Shams of Tabriz. Through careful analysis, he explicates various lines of poetry that have seemed awkward or disconnected to critics. He illuminates the unique stages of ecstasy and universal love as described in the poetry. He also shows how Rumi’s inner psychic life, and ostensible telepathic conversations, are expressed in poetry.

The Soul’s Journey: An Interview with Doug Marman by Jeffrey Mishlove

This is my second interview with Jeffrey Mishlove, for his YouTube channel “Thinking Allowed.” The interview is about 55 minutes long. Jeffrey interviewed me about my book, The Silent Questions. Here is what Jeffrey says about the interview on his YouTube page:

Doug Marman describes his own unique path through life – starting with mystical and psychic experiences from childhood. Following his inner promptings, he dropped out of college and spent weeks alone in a tent in the woods. With only $35 in his pocket, he traveled to Las Vegas, Nevada, in order to connect with the spiritual school founded by Paul Twitchell. Working in the office there, he learned much and was fired twice. His intuitive insights led to a career in high-technology and over twenty patents.

The Art and Science of Soul Travel: An Interview with Doug Marman by Jeffrey Mishlove

Jeffrey Mishlove interviewed me for his YouTube channel “Thinking Allowed.” The interview is about 45 minutes long. It was a fun discussion. Here is what Jeffrey says about the interview on his YouTube page:

Doug Marman, an Eckankar practitioner, is author of The Whole Truth: The Spiritual Legacy of Paul Twitchell. Here he describes his involvement with the Eckankar religion going back nearly 50 years. He emphasizes the importance of experience, as opposed to doctrine, with regard to the nature of soul travel. He discusses contact with teachers and guides on inner planes and describes paradoxical reversals of meaning at different levels of consciousness. He also engages in a fascinating discussion concerning the “Space Intelligences” described in Mishlove’s book, The PK Man.

A guest article by: Thomas Stemmer

Lying on the bed late at night
I watch the patterns of shadows weaving about the room.
Paul Twitchell — The Flute of God

Living means experimenting. There is no way around it. No way to avoid it.

So it came to my mind that it might be possible to do some experimenting around the notions of happiness and unhappiness. Most certainly, the two options are always available. However, as some kind of a third and largely unconscious option, you can be unhappy without noticing it, mainly because all the other people around you are in an even worse condition and that still puts you in a rather comfortable position.

The moment I became aware of the fact that—at least—during the last decade I had not had a single moment of overwhelming happiness, come to me during a week’s stay in Dublin, Ireland.

It’s All Poetry: Lessons From the Spiritual Path

I gave the following talk at a library just north of Toronto on September 29, 2019. The talk is called: “It’s All Poetry: Lessons From the Spiritual Path.”

Since we were children, we have all been taught how to understand the world using our mind. However, the spiritual path is different; it can’t be learned this way. This talk describes how the secret of the spiritual path draws us in, little by little, until we see how poetic life really is. This is a discovery that emerges through personal experiences. No one can give this wisdom to us. It comes to those who walk the spiritual path.

The talk lasts for about one hour and ten minutes. It is followed by questions and answers that last another 40 minutes.

This book reveals a secret that has been hidden for over 700 years.

Behind the poetry that Rumi created out of love for his teacher, Shams of Tabriz, is a deep spiritual teaching. Millions are drawn to the beauty of Rumi’s writings, but rarely are full poems quoted because they are so difficult to understand. They are seen by most as spontaneous expressions of love and spiritual ecstasy that seem to leap from one moment to another.

However, there is a thread that weaves these moments into whole cloth. Each poem shares a poignant lesson about a spiritual teaching that can only be seen with eyes of love.

Excerpt from: THE HIDDEN TEACHINGS OF RUMI:

Imagine working together with others to translate some of Rumi’s poems that are not well-known in the West but are famous to Persian-speaking people. You hope to cap­ture in English the deep meaning that you sense hiding in Rumi’s poems, while staying as close as possible to the Farsi terms and phrases that Rumi uses. You wonder if it is even possible to retain Rumi’s subtleties and beauty.

You start with a poem that has often been quoted for a few lines that are truly striking in their depth of longing for love, but the rest of the verses are hard to follow. You aren’t sure the lines you like even relate to the others in a cohesive way. They might be no more than the spontaneous outpourings of an ecstatic mystic, as many believe.

However, as you start working with the poem, you notice subtle clues that suggest another level of meaning. At first, it is only one section that jumps out this way. But when you start to consider some of the less common meanings of some of the words, especially some of the “old Farsi” uses of those terms, you suddenly see a puzzle falling into place. A new image is revealed that is deeper and more moving.

I gave a talk at the University of Toronto on September 27 about a new book that I wrote with Farzad Khalvati and Mitra Shafaei. The new book is titled: The Hidden Teachings of Rumi. A separate post will describe the book in more detail.

We have been working on the book for the last year and a half. It offers new insights into how to understand the hidden teachings in Rumi’s deepest spiritual poetry that he dedicated to his spiritual teacher, Shams of Tabriz. You can watch the talk below. The talk lasts for about an hour, followed by about half an hour of questions and answers at the end.

The audience was made up off scholars who specialize in the study of Rumi, and a large number of students, and visitors who love Rumi’s poetry. The talk was well received, and the discussion at the end was lively.

Something extraordinary takes place when discovering new insights into life through deep discussions with friends. Time seems to stand still as new perspectives suddenly open up before us.

In such moments we sense the scope of truth so fully, as a whole, that it alters our experience, giving us the feeling we are touching life, itself.

This is what Spiritual Dialogues is about.

This book reveals a secret that has been hidden for over 700 years. Behind the poetry that Rumi created out of love for his teacher, Shams of Tabriz, is a deep spiritual teaching. Seen by most as spontaneous expressions of love and spiritual ecstasy, there is also a thread that weaves these moments into whole cloth. Each poem shares a poignant lesson about a spiritual teaching that can only be seen with eyes of love. $17.95

The Spiritual Flow of Life

There's a mystery at the heart of biology: What makes organisms alive? Catalysts are keys to solving this puzzle. The new insights gained are transformative. Seeing the way life works—the way it FLOWS—changes what it means to be alive. $16.75

How did the universe come into existence out of nothing? Why is biological life irreducible? What are the deeper principles that create the laws of nature? Lenses of Perception reads like a detective novel, as it dives into the foundations of physical reality and uncovers the surprising role of consciousness. $19.90

It Is What It Is

It Is What It Is: The Personal Discourses of Rumi brings you across time to sit at the feet of one of the world’s greatest spiritual teachers. Jalal al-Din Rumi lived over 700 years ago, yet his voice still echoes around the world today. Rumi’s discourses have long been recognized as a key to unlocking the depths of his wisdom. $19.75

The Silent Questions By Doug Marman

This new book is not about answers. It is about the power hidden behind questions that have haunted people since the beginning of time. The Silent Questions begins with a life-altering dream experience, followed by a series of unexplainable events that propel the author into a quest for truth. $18.95

The Spiritual Legacy of Paul Twitchell
By Doug Marman

The real subject of this book is about truth and how we find it. It begins with a public, Internet dialogue about one of the most unique individuals of the twentieth century: The spiritual rebel Paul Twitchell. Digging for the truth behind accusations of cover-up and fraud unravels a pattern of imagined plots arising from rumors that were promoted for more than twenty years. $19.95 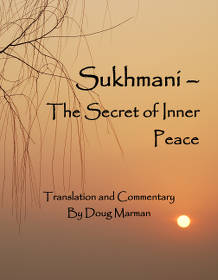 The Secret of Inner Peace
By Doug Marman

A new translation and commentary of one of the deepest and most insightful testaments ever recorded. Written over 400 years ago, it is an answer for those wanting to find peacefulness. This book tells another story as well: Spiritual teachings are often lost through dogmatic thinking and rituals - even when the author warns of this danger. $6.75