The main premise of the Lenses of Perception theory is that there are fundamental lenses—ways of seeing—and we can only perceive through one lens at a time. A recent series of experiments validates this idea.

Researchers from Case Western University and Babson College published a study three weeks ago titled, Why Do You Believe in God? Relationships between Religious Belief, Analytic Thinking, Mentalizing and Moral Concern.

Their test results show that when people think of religious matters, their brains suppress critical thinking. And when they focus on scientific topics, their brain suppresses religious thoughts.

“It suggests religious beliefs and scientific thinking clash because different brain areas are involved in both cognitive processes.”[1] 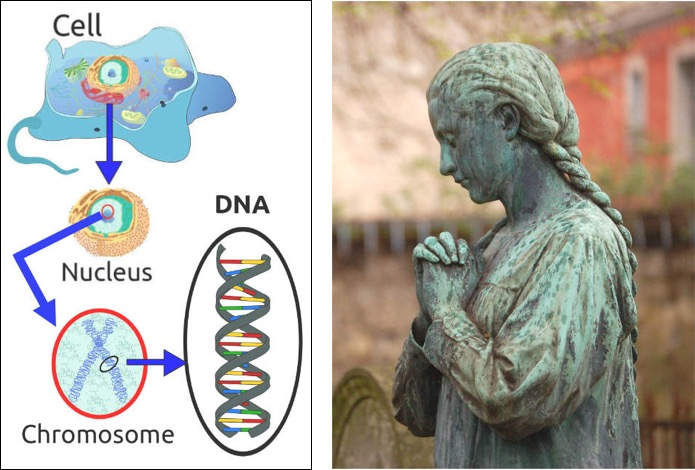 Thinking about science and thinking about religion require two different brain networks, and both networks suppress the other. (“Say your prayer” photo by Joachim Bär. Eucaryote cell illustration from Wikipedia.)

In other words, the experiments showed clearly that working with science involves one brain network, while religion works with a completely different network. And the two networks interfere with the other, making it hard to use both at the same time.

The fact that these brain networks clash with each other is one reason we see conflicts between religious belief and science. However, lenses of perception theory suggests that this isn’t the underlying cause.

Our brains evolved these two networks for a reason: The world is governed by different ways of seeing. This isn’t just about the lenses that human beings use. It reaches all the way down to the level of subatomic particles.

Everything works this way because the world isn’t created by outer forces. It comes into existence through conscious experiences, at every level. That’s why perception plays such an important role.

For example, the scientific perspective uses a third-person lens. That’s the lens we use when looking at the world as if we’re outside observers. This turns out to be the best approach for studying mechanical reactions because particles go along with the outsider perspective. This is why, when trying to analyze a cause-and-effect process, third-person lenses give us the clearest picture of what’s happening.

But the world isn’t just mechanical. Relationships also hold groups together and connect beings to each other. These ties emerge from second-person experiences, created by common interests shared with others.

Second-person perceptions are the basis of all relationships. However, they come in two distinct forms.

First, there is a sense of empathy that allows us to relate one-on-one with another person or animal. We experience this with friends and our pets when we connect with them.

When someone we care about is in pain, we actually feel it. At the subatomic level this is known as entanglement. If two particles become entangled, they literally form an invisible alignment that reaches across time and space. This is one of the many mind-boggling features of quantum physics that make sense when we see them as relationships.

The second type of second-person perception gives us our moralistic sense of the right thing to do. Moral concerns emerge from connections to groups such as communities we belong to, companies we work for, or even our feeling for the human race or the whole of life. Working together with others shows us that we can create something greater as part of a group.

This is where our sense of responsibility comes from. We want to contribute. We want our lives to mean something. I call this the “all-for-one bond,” because it’s a special relationship that team members have with each other when working toward a singular goal.

At the level of fundamental particles, the same force holds atoms together. And in biology, cells bind to the organisms they belong to for the same reason.

So, our brain evolved ways of seeing these patterns of behavior because the world is shaped by these relationships.

The research paper, above, ran tests to see the difference between empathy and moral concern. They wanted to determine how each of these two types of relationship relate to religious belief. Surprisingly, they found that only the moralistic sense showed a strong connection. Empathy played hardly any role at all in the religious experience.

This raises another interesting point reported by the above paper: There is no reason why we can’t move back and forth between religion and science, between our moral sense and an analytic perspective. We simply need to learn that they engage two different ways of seeing. Two different brain networks are involved. This means that we need to change lenses when shifting from one to the other.

“The study also points out that some of the great scientists of our times were also very spiritual men. ‘Far from always conflicting with science, under the right circumstances religious belief may positively promote scientific creativity and insight,’ says Tony Jack, lead author of the study. ‘Many of history’s most famous scientists were spiritual or religious. Those noted individuals were intellectually sophisticated enough to see that there is no need for religion and science to come into conflict.’”[2]